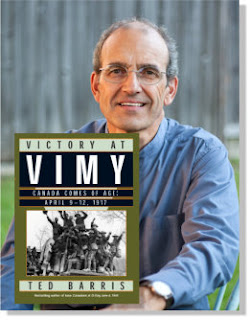 “Victory at Vimy” – Story of the birth of a nation
What the world witnessed that Easter Monday morning – April 9, 1917 – was a near miracle of ingenuity, co-operation and courage among volunteers of the Canadian Corps. That day, 80,000 of them – fighting for the first time as a national army – swarmed up that strategic ridge in north-central France and in a matter of hours accomplished what no Allied army had, in nearly three years of blood-letting in Europe. They seized Vimy from an entrenched German army. Some say those young citizen soldiers also breathed life into a fledgling nation – Canada.
In a talk/visual presentation, based on his book Victory At Vimy: Canada Comes of Age, April 9 – 12, 1917 Ted Barris reconstructs the blow-by-blow moments of that historic four-day operation, that some say changed the momentum of the war. It put Allied troops in control of the strategic Vimy heights for good. For the first time, it sent the most powerful army in Europe into full retreat. It also firmly established the four Canadian Infantry Divisions as the most effective fighting force on the Western Front. Archived on YouTube: https://youtu.be/T31S9Lfizuk
Visit our website:  www.durham.ogs.on.ca

“This program is not sponsored by the Oshawa Public Library and does not carry any responsibility for its content”
Posted by Durham Region Branch 22 at 9:51 PM