It won't cost a penny, a cent, a rouble, or a yen to find living relatives at LostCousins between Christmas Day and January 4th - all members old and new will have subscriber privileges for those 11 days!
Make sure that you take FULL advantage of this opportunity - the more relatives you enter on your My Ancestors page, the more cousins you'll find, because every single one is a potential link to a new cousin.
Of course, the more researchers who take part in the unique LostCousins project, the greater the opportunity to make connections. That's why - for the first time ever - I'm offering you the chance to bring in your friends and relatives as new members by offering them a one-year subscription that costs absolutely NOTHING!
That's right - any new member who joins between now and January 4th 2010 quoting the offer code PROJECT1881 in the offer codes box at the bottom of the registration form will get a complimentary subscription that lasts until December 31st, 2010. There is only one catch - the new member must have at least one British ancestor who was recorded on the 1881 Census.
How many people do you know who are researching their British ancestry - but AREN'T LostCousins members? This fantastic offer is a great way to expand the membership for the benefit of existing members - but of course the new members also benefit, because they're getting a subscription that normally costs 10 pounds for absolutely nothing.
There are more special offers online in the special Christmas edition of my newsletter - for example, if you are quick, you can SAVE 15% on a subscription to findmypast!
To read the newsletter simply click the link below (if that doesn't work for any reason, just highlight it, copy it, then paste it into your browser). Remember, you don't need your password - it's not necessary to log-in just to read the newsletter.
http://lostcousins.com/newsletters/latest.htm
Peter Calver
Founder, LostCousins
Posted by Nancy Trimble at 10:31 PM 0 comments 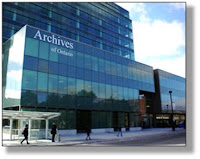 Archives of Ontario, What's There for You!
Guest Speaker: Stewart Boden, Outreach Officer, A of O

A brand new and extremely informative presentation introducing to the Archives of Ontario, its new building, and the collections and services that will be of interest to genealogists. Stewart will discuss how to research at the Archives, and about the different ways to access some of the most popular records held there. For those who are already familiar with the AO, the presentation will review some of the most important changes that have been made in the past year, including the redesigned website and the expanding educational programming.

Stewart Boden has been at the Archives of Ontario since 2001. He spent five years as a Reference Archivist, helping researchers find and use photographic, architectural and cartographic records. His passion for archival advocacy led him to his current position as Outreach Officer, a job he has been doing since January 2007.
Posted by Guy Lafontaine at 8:40 PM 0 comments

You can register on-line or download a pdf registration form from the following link:
http://torontofamilyhistory.org/2010/how-do-i-register
The programme and speakers look great!
Posted by Nancy Trimble at 6:49 PM 0 comments

Email ThisBlogThis!Share to TwitterShare to FacebookShare to Pinterest
Labels: conference

It was a pleasure this morning to read in the Toronto Star about Brian and his career . . . journalist, historian and Town of Whitby archivist. An elementary history teacher sparked Brian's interest which he turned into a career. Well done Brian.
Read the whole article at:
http://www.thestar.com/news/gta/localhistory/article/738341--making-new-discoveries-about-old-days
Brian is a long time member of OGS and served as Branch secretary for eleven years.
Posted by Guy Lafontaine at 4:01 PM 0 comments

The programme for each day of Conference 2010 (May 14-16,2010 in Toronto) has been posted on the Conference page at:
http://torontofamilyhistory.org/2010/
Look on the left hand side and you will find many links about extra lectures, excursions, and workshops, as well as Italian and Dutch streams.
At the very bottom left, there is an area to sign up for the Conference 2010 Blog, which will come to your e-mail automatically.
Registration for Conference 2010 is not up and running yet, but the information for meals and accommodations is there.
Many great speakers lined up for us!!!
Posted by Nancy Trimble at 7:18 PM 0 comments

Some members brought various family ephemera including jewelry, historical county atlas, medals, war ration books and even a unique spoon holder. These family artifacts helped paint a picture of the period when their ancestors were living. They demonstrated the community and familial interaction during various times of their families' histories.

Another member told the story of keeping track of a grandmother's residences. The difficulty was not where she was living but the time of day that she chose to move out or to move in, at times peculiar.

Two members demonstrated in separate presentations how their research helped them discover living 3rd and 4th cousins. This was not just a genealogical discovery but also the finding of new colleagues in research.

Another' s ancestor was a political prisoner in the 1837 Upper Canada rebellion. The curiosity was an elaborate wooden gift box carved during his stay in prison. It appears many prisoners may have occupied themselves with similar carving/engraving projects - interesting security implications too.

The meeting concluded with an extended social time , enjoying the holiday treats brought in by the members. Happy Holidays.

The next meeting is January 5th with a presentation about the new Archives of Ontario.
Posted by Guy Lafontaine at 7:57 PM 0 comments

by Rick Aristotle Munarriz of the Money Times - November 13, 2009.
Read the WHOLE ARTICLE.
Rick's suggested 'buys' by Google are speculation but very interesting including the one below.

QUOTE:
"There are few things that Google (Nasdaq: GOOG) loves more than ads and mobs, so it wasn't surprising to see the world's leading search engine snap up mobile marketing network AdMob this week in a $750 million all-stock deal.
I closed my coverage of the deal with two meaty questions:
* Is Google conserving its greenbacks for an even bigger purchase?
* Does Google feel that its stock is expensive at this point, making it ideal legal tender?"

Ancestry.com (Nasdaq: ACOM)
The leading genealogy site went public this month, so Google has a shot to grab it while it's still in the crib.

Ancestry.com is profitable and growing quickly. Website users have
created more than 12 million family trees, lush with profiles of 1.25
billion descendants. This isn't a perfect model; the premium
subscription approach brings in money, but it also attracts problematic
churn rates. It's also just a matter of time before free, ad-supported
models make a bigger splash.

However, Google's prime business is attracting folks looking for something. Isn't this what Ancestry.com is all about?