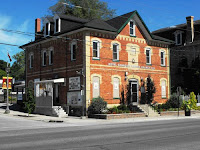 Hours Open: 10 a.m. to 4 p.m.
Originally built as The McQuay House in 1882-83, this building operated as a hotel until 1964. An early advertisement notes that it was built “with a view to supplying the best accommodations for the travelling public.” Known also as The Temperance House and The Brooklin House, it was purchased in 1967 by Branch 152 of the Royal Canadian Legion and reopened as a Legion hall in 1970.

Experience ’s rich and varied heritage!  For a complete list of participating sites and local maps, contact The Town of .