New Project for Missing Allied Soldiers from World War I


Do you have a missing soldier from World War I?
A new project aims to commemorate the 338,000 allied soldiers who are still missing from World War I. Of the 1.1 million allied soldiers who were killed in The Great War, only about half were ever identified and received a decent burial. The remaining soldiers lie where they fell, on the field of battle, whether it be Gallipoli, the Western front, or elsewhere. These soldiers in particular deserve to be commemorated.

Pick a Soldier, Plant a Tree
The new project encourages people to pick a soldier from a list of the known missing soldiers and build a family tree for that soldier going back several generations (using their own family knowledge or available genealogical records). The tree can then be “planted" on the EveryOneRemembered website (https://www.everyoneremembered.org) by simply attaching a commemorative “story" to the soldier in question and posting it on the website.

The new project will be of particular interest to family historians and genealogists, but everyone is encouraged to participate, even school children. It is hoped that family trees will be planted for all 338,000 missing soldiers. 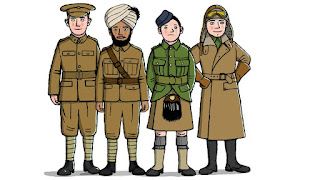 DNA Testing
The project is in two parts. The first part (described above) is simply called “Pick a Soldier, Plant a Tree”. The second part of the project encourages relatives of the soldier to do a DNA test in commemoration (using any of the commercially available tests), and leave the DNA kit number or contact details on the EveryOneRemembered website.

Why do DNA testing? Every year about 30 to 60 sets of remains are discovered during routine farm work or building activity in Northern France and Belgium. Previously, these unidentified soldiers would be buried in a grave with a headstone that simply stated “a soldier known unto God“. But in recent times, DNA has helped identify some of these soldiers. And more may be identified in time as DNA testing technology advances.

For further information on the project, visit the Commemorating the Missing website at https://commemoratingthemissing.blogspot.com/p/home.html
Posted by Nancy Trimble at 3:06 PM